National Night Out Event Named Tops in the Nation 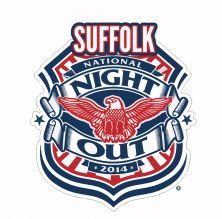 Suffolk is also the highest ranking City/County in the State of Virginia and one of only two Hampton Roads Cities/Counties to place Nationally (Smithfield, Virginia - Number 33 in Category 5).

On the first Tuesday night of every August, neighborhoods all across Suffolk's 430 square miles join forces with thousands of communities for the Annual National Night Out (NNO) crime, drug, and gang awareness event. Sponsored by the National Association of Town Watch (NATW) and co-sponsored locally by the Suffolk Police Department, this annual event involves over 37 million people in 10,000 communities in 50 states, Canadian cities and military bases worldwide.

National Night Out is designed to heighten crime and drug prevention awareness; generate support for, and participation in, local anti-crime efforts; strengthen neighborhood spirit and police-community partnerships; and send a message to criminals letting them know neighborhoods are organized and fighting back