The City of Suffolk Media and Community Relations Department was recently honored with a pair of awards in the 25th Annual APEX Awards for Publication Excellence competition. 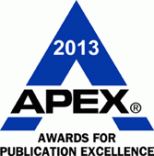 The video public service announcement (PSA) for the Love Local, Buy Suffolk campaign was recognized in the Campaigns, Programs, and Plans: Government Agency Communications category. The PSA highlighted the campaign which is designed to educate and encourage Suffolk citizens to maximize the impact on their community with their purchasing power by supporting local Suffolk businesses. Included in the video are local residents and business owners along with Mayor Linda Johnson.

The video can be viewed on the City of Suffolk’s YouTube channel.

The “2012 City Council Retreat Video” was recognized in the Electronic Media: Video Publications category. This video was originally presented at the 2012 Suffolk City Council Retreat and featured a theme of “Building on Progress”. Accomplishments and highlights from the past year were included in the presentation. The video can be viewed on the City of Suffolk’s YouTube Channel.

The City of Suffolk Media and Community Relations Department is responsible for external and internal communications for the local municipality. This includes the City’s Municipal Access TV Channel (available on Charter Cable Channel 190 as well as online live streaming and video on demand), the City’s website, and the City’s social media outlets (Facebook, Twitter, YouTube).