The City of Suffolk Media and Community Relations Department has received a Gold Award in the 2013 MarCom Awards Competition for the “2013 Suffolk City Council Retreat Video”. The Gold Award is presented to those entries judged to exceed the high standards of the industry norm. 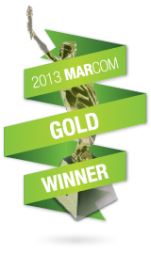 The “2013 City Council Retreat Video” was recognized in the Video/Film/Government category. The video was originally presented at the 2013 Suffolk City Council Retreat and also aired during the Suffolk City Council Legislative Dinner. The production features a theme of “Getting Things Done”. The video highlights the accomplishments and development seen throughout the City of Suffolk during the past year. The video can be viewed on the City of Suffolk’s YouTube Channel. Production Coordinator William “Andy” Franklin, Video Production Assistant Rajeana Price, and Media and Community Relations Manager Tim Kelley assisted in the production of the video under the guidance of Diana Klink, Director of Media and Community Relations.

The City of Suffolk Media and Community Relations Department’s responsibilities include external and internal communications for the local municipality. This includes the City’s Municipal Access TV Channel (available on Charter Cable Channel 190 as well as online live streaming and video on demand) the City’s website, and the City’s social media outlets (Facebook, Twitter, YouTube).