The City of Suffolk is planning to replace the bridge and perform minor roadwork on the Freeman Mill Bridge over Spivey Swamp (Structure #8049).

The existing bridge is a single span structure that carries two lanes of traffic (one in each direction) and is approximately 31 feet long and 22’ 8 ½” wide. The timber decking is supported by a multi-steel beam superstructure and the superstructure is supported on a timber substructure.

The Freeman Mill Bridge was built circa 1954 (67 years old) and is considered structurally deficient. The bridge is posted as 9 tons and 12 tons for VA Type 3 and VA Type 3S2 vehicles, respectively. The bridge is also considered functionally obsolete (i.e. does not comply with current standards) based on geometrics and railing.

The bridge is scheduled for replacement in 2023. The service life of the proposed bridge will be 75 years. 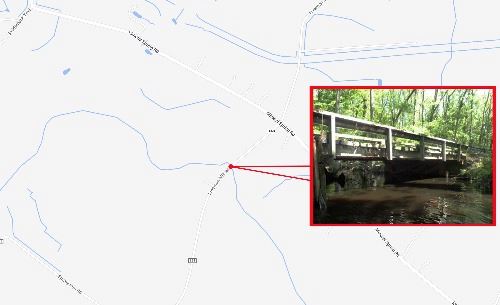