The fight against gangs is one of the top priorities of our office. We know that when gangs exist in a community they can seriously impact schools, using them as recruitment centers and claiming them as gang territory. Perhaps the most threatening aspect of gang proliferation has been the increasing use of firearms. Studies have shown that gang members possess significantly more guns than other at-risk youth, making gang violence even more deadly. For these reasons, we have combined gang education with our Suffolk Exile message which targets the illegal possession of guns by educating the public about the consequences of guns and schools, guns and drugs, and guns and felons.

What is a Gang?

For the purposes of this website, let us use the following basic definition: A "gang" is a group of three or more individuals (adult/juvenile/male/female) in association with each other (on regular or part-time basis) using some type of identifier (like a name, sign, symbol or color) committing crime (any crimes - misdemeanor, felony or against any city ordinance). 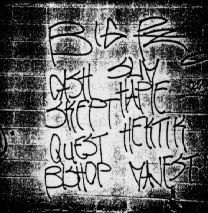 It's important to remember that we all have a role to play in solving problems within our communities, and crime and gang violence are no exception. To remove the scourge of gangs - and gang violence - from the experience of Suffolk's youth requires an integrated, comprehensive approach that includes education, prevention and prosecution. Together we can give at-risk youth our time, attention and alternatives to a gang life. However, our youth must understand that there are consequences for their actions, and those involved in violent gang activity will be prosecuted to the fullest extent of the law.

Gangs use graffiti to identify themselves and their territory. With graffiti, they mark their territory or turf, declare their allegiance to the gang, advertise the gang's status or power, announce their presence, challenge rivals and announce working relationships between gangs. Graffiti is also used to intimidate the residents who live in a gang-controlled area.

Graffiti can also be used to communicate messages and to show alliances or conflict between gangs. The graffiti may indicate the gang's name, the member's nickname, a declaration of loyalty, a memorial to a slain gang member, or a description of criminal acts in which the gang has been involved.

Gang graffiti can be found on neighborhood walls, fences, streets and mailboxes. It may also be found on clothing, athletic shoes, notebooks, photographs and bedroom walls. Graffiti is sort of the newspaper of the gang culture.

Gangs purposely vandalize and destroy public and private property in order to enhance their reputation. Of equal concern with property damage is the violence associated with gang graffiti.

The presence of any type of graffiti can be an indicator that a gang is present and can be an important source of information for both law enforcement and community members.

Young people join gangs for a variety of reasons which can be influenced by conditions in their family, school and neighborhood. A vulnerable child seeks love, protection and the acceptance of his or her peers. Youth who lack parental guidance and support, or opportunities for positive involvement with their peers, often turn to a gang to meet those needs.

Other reasons for joining a gang include: excitement, physical protection, peer pressure, family tradition, perceived financial gain, "respect", being wanted and valued by a group, being feared by others, getting girlfriends, gaining notoriety or out of boredom.

The key to prevention is taking action! Prevention is part of a formula to building healthy communication and reducing gang activity. Everyone and every community can work on solutions to minimize problems. Effective anti-gang efforts begin with partnerships among parents, schools, law enforcement, religious institutions, community organizations, businesses and youth. The key is that individuals and the community take action. The most important thing an individual, a group or an organization can do is get involved.

A Message From Your Commonwealth's Attorney

If gang incidents occur in your neighborhood, cooperate with the police. Your help may prevent others from becoming victims of gang violence. Any information about gang crimes, wanted suspects or gang activity should be reported to the police rather than trying to handle what might be a violent situation on your own.
Employment
Career Opportunities
Volunteer
Volunteer Opportunities
Online Payments
Pay Taxes
City Budget
Current Fiscal Year Budget
Suffolk Municipal Channel
Streaming & On-Demand Video
[]