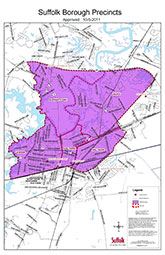 Council Member John T. Rector was elected to the Suffolk City Council in November of 2022 and sworn in on January 3, 2023, as the representative of the Suffolk Borough. His term expires on December 31, 2026.

A resident of the City of Suffolk for over 35 years, Council Member Rector is currently a Realtor with Chorey and Associates Realty, LTD. Previously, he served as Vice President of Berkley Machine Works and Foundry, Company Incorporated in Norfolk and later Berkley Machine LLC, when the business moved to Suffolk in 2008. He graduated from Norfolk Academy in 1977 and received a Bachelor’s Degree in Finance from Virginia Polytechnic Institute in 1981. As vice president of Berkley Machine, Council Member Rector served the manufacturing needs of many heavy industries with a focus on the Pulp and Paper industry, providing repair and replacement services to mills all along the Eastern Seaboard.

Council member Rector is a longstanding member of Saint Paul’s Episcopal Church, is head of its Endowment Committee, and Vice President of Saint Paul’s Incorporated. As a Realtor and a member of the Hampton Roads Realtors Association, Rector serves on its Government Affairs Committee.