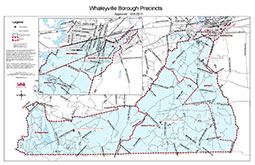 Council Member LeOtis Williams was elected to the Suffolk City Council from the Whaleyville Borough in November of 2020. His term expires on December 31, 2024.