On March 22, 2014, the Suffolk Police Department received formal recognition by the acceptance of their award at the Commission of Accreditation for Law Enforcement Agencies (CALEA) conference which took place in Garden Grove, California. This award comes after several years of intense review, construction, and modification to policies, procedures and practices which are the building blocks of the department’s foundation. 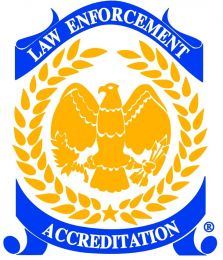 As a community oriented department, public trust is an integral part of its function on a day to day basis. This rigorous process offers a transparency to the public which mutually benefits both parties so that the Suffolk Police Department can work together to build and support the most viable community possible. Enrollment in the CALEA Accreditation process is strictly voluntary as most departments would not be able to reach compliance with the strict accountability standards that are required. A mere 5% of all Police Departments in the nation are accredited as it takes the highest level of commitment to excellence to be able to comply with all of the requirements. By voluntarily subscribing to this strategic and comprehensive accreditation process, the Suffolk Police Department has once again attested to its commitment to the citizens of Suffolk.

In December of 2013, the Suffolk Police Department underwent a three day external review by a team of CALEA assessors. The review actually began with the assessors critically inspecting all department files prior to their arrival on-site. Once on-site, they re-reviewed these files, toured the agency, and conducted numerous interviews with both officers in the field as well as citizens within the community. An open phone session was held as well as an open public comment forum in City Council Chamber. Lead Assessor Randy Nichols remarked that throughout all of these events “no matter whom they spoke with” the responses were all “consistent” - “Every contact made by assessors in the agency and the community produced positive comments and a show of support for the Department.”

Preparation for this assessment was rigorous and time intensive including upwards of three and a half years of concentrated effort. Prior to this, the Suffolk Police Department had been working with a set of approximately 73 policies which had been in place since 2001. All of these policies were extensively reviewed to ensure that all needed updates were addressed. The result was that many of those policies were eliminated and the task of creating what is now approximately 75 brand new policies, as well as approximately 60 Standard Operating Procedures, ensued.

The dynamic nature of law enforcement requires that the department constantly stay updated on the issues which they face and guide personnel accordingly. To further ensure the integrity of these policies, weekly staff meetings were implemented for the review of each one. The result is a policy which has had input and approval from each member of the Command Staff, as well as the City Manager, City’s Human Resources Department, and the City Attorney’s Office. Suffolk Police Chief Thomas Bennett stated, “Accountability is important to the profession of law enforcement. We want to make sure that everyone is on the same page. Each step of the process is time consuming but it concludes with a policy that has been through all the checks and balances and input is absorbed from each level of the department and the City to ensure that it meets the needs of the community and our department.”

In addition, surprise line and staff inspections were implemented as well as procedures for easier tracking of many processes. The Suffolk Police Department now conducts an annual analysis of each policy. These analyses are an in - depth look at the policy, the procedures which have been in effect for the previous year in accordance with that policy, and the trends and patterns which have resulted due to its implementation. Examples of this include inspections (announced and unannounced) of property and evidence operations, the review of all pursuits, an annual review of all Internal Affairs complaints and the annual review of employee grievances. These analyses give the department the ability to make better informed decisions regarding the critical operations of the police department.

Chief Bennett added, “Our department has worked diligently to become an agency that the citizens of Suffolk can be proud of and every employee has played a part in this process. The award of this accreditation demonstrates how hard the department has worked and how hard we will continue to have to work in order to maintain accreditation. As the Chief of Police, I have seen the changes and the work first hand. These changes put transparent systems in place which allow the citizens we serve to see those changes as we build a Police Department of which they can be proud.”