The PAFR was produced by the City of Suffolk Finance Department in conjunction with graphical and layout work by the City of Suffolk Media & Community Relations Department. Reviewers recognized Suffolk’s PAFR for it’s professional format and considered the information contained within to be well-organized. The charts, graphs and photos were noted to be very interesting to view. Additionally, the reviewers commented favorably that the financial data in the report is produced in a format that can be understood by an individual without an accounting background, through the effective use of charts, graphs and non-technical narratives.

The report provides an overview of the City’s financial results and is designed to increase awareness throughout the community of the City’s financial operations in a user-friendly manner. The information is derived from the audited financial statements in the City’s 2015 Comprehensive Annual Financial Report (CAFR), which is the formal annual report. The 2015 PAFR (PDF) is available for viewing on the City’s website. Additionally, hard copies are available at the Finance Department located at 442 West Washington Street, all Suffolk Public Libraries, the East Suffolk Recreation Center (138 South 6th Street), the Whaleyville Community Center (132 Robertson Street), and the Media & Community Relations Office located at 442 West Washington Street. 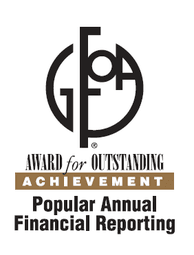