or the 14th straight year, the City of Suffolk’s National Night Out event was named in the Top 5 in the nation among communities with a population of 50,000 to 100,000 residents by the National Association of Town Watch (NATW). Celebrated on August 6th, Suffolk’s 2019 edition of National Night Out saw thousands of individual citizens, neighborhoods, civic groups, businesses, City employees, and City public safety personnel gather to celebrate and say no to crime.

National Night Out is an annual community-building campaign that promotes police-community partnerships and neighborhood camaraderie to make our neighborhoods safer, more caring places to live. This event enhances the relationships between neighbors and first responders while bringing back a true sense of community and provides a great opportunity to bring police and neighbors together under positive circumstances.

The Suffolk Economic Development Authority (EDA) voted to award $15,000 to  Wall Street Cafe, who will be establishing a new venture at 118 W. Washington Street. The Community Business Launch (CBL) program (working with the Virginia Department of Housing and Community Development) selected Suffolk as a Virginia community authorized to award state grant funds to qualified new or existing small businesses operating in a downtown district. Wall Street Cafe joins previously awarded Suffolk grant recipients SPARC Shoppe and Nansemond Brewing Station. The two-story Wall Street Cafe will house a coffee shop on the first floor and a real estate and finance professional office on the second floor. They plan to open in early 2020.

The newly adopted Downtown Suffolk Master Plan outlines several facets of the revitalization process. One important aspect of the plan is to implement a "retail strategy to maximize the return on investment". In addition to a recruitment strategy, city leaders aim to explore expanding existing grant programs and looking at additional means of assistance for start-ups.
With this in mind, the EDA also voted to expand Downtown Suffolk incentive programs by introducing a new initiative. The EDA’s Downtown Suffolk Business Development Program will assist retail businesses and restaurants interested in expanding or opening in Downtown Suffolk.

Suffolk Police’s Forensic Unit, led by Julissa Armstrong, Forensic Supervisor, achieved ANSI-ASQ reaccreditation. In September 2016, they received the first accreditation of a forensic unit in Hampton Roads. ANSI-ASQ stands for American National Standards Institute /American Society of Quality Control. Armstrong spent months preparing, rewriting policies, establishing updated procedures, implementing annual proficiency testing of her staff, all culminating in an assessor review that occurred earlier this fall by an accreditation team that specializes in Crime Scene Investigation. They received the letter on October 20th confirming that they had obtained the reaccreditation.

There were approximately 170 standards across five different sections that include documentation, evidence collection, chemical screening tests, latent print development and general laboratory procedures that were reviewed as part of the process.

There are limited accreditation bodies in the United States for forensics, and this particular body was chosen for accreditation because it has an outstanding reputation and is responsible for the Department of Forensic Science Lab accreditations. Suffolk initially was only the second forensic unit in the Commonwealth of Virginia to achieve the ISO 17020 accreditation, joining Prince William County Police forensics services in this prestigious designation.

The results of the American Heart Association 2019 Work

place Health Achievement Index were recently announced and Suffolk achieved the Silver Level recognition for taking significant steps to build a culture of health in the workplace. The City’s Employee Wellness Program began in 2010 and has progressively led to an increasingly health-conscious workforce, resulting in positive trends among multiple chronic conditions.

The American Heart Association created the Index for companies who are committed to applying evidence-based approaches to improve their employees’ overall health. The Index uses science-based best practices to evaluate the overall quality and comprehensiveness of their workplace health programs. Studies show that worksites with a culture of health with comprehensive, evidence-based policies and programs, and senior leadership support are more likely to have engaged employees and a healthier, more productive workforce.

A unique feature of the Index is that it calculates an average heart health score for employees of participating companies that securely submit aggregate health data. Companies receive benchmarking reports, which allow them to identify potential areas of improvement so that they can advance their annual performance and recognition.

Upon learning of the achievement, City Manager Patrick Roberts noted, "We couldn’t be more proud of our Human Resources Department and the countless opportunities they have provided to our employees to enhance their overall health and wellness. Combined, these make for an even more productive workforce which allows us to better serve our citizens."
The American Heart Association also featured a multi-page ad in Forbes® American Business Magazine including the names of all recipients of the Workplace Health Achievement recognition. 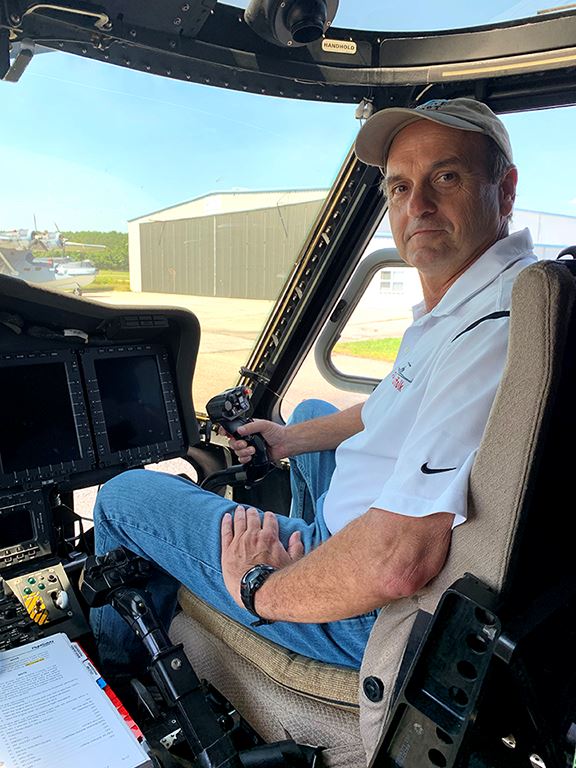 A Suffolk employee has been selected to receive the Virginia Airport Manager of the Year Award for 2019.

Tim Daniel, Airport Manager at the Suffolk Executive Airport, was selected by the Commonwealth of Virginia Department of Aviation to receive the honor due to his outstanding contributions toward the development of aviation in Virginia.  He was especially commended for his assistance in, “Bringing both a restaurant and flight school to the airport, thereby making it a wonderful attraction to pilots, and helping create the next generation of aviators.”  He was further praised for a number of capital and safety achievements.

Tim has been employed by the City of Suffolk since February 2015 and manages and oversees all airport flight operations, ensures compliance with all Federal Aviation Administration (FAA) safety regulations, in addition to preparing the airport budget, supervising staff, and administering leases for airport tenants among other responsibilities.

On learning of his selection as Airport Manager of the Year, Kevin Hughes, Director of Economic Development, who oversees the Suffolk Executive Airport, noted, “Tim is a dedicated employee and we congratulate him on receiving this well-deserved recognition”.

The American Public Works Association (APWA) Mid-Atlantic Chapter recognized a pair of projects in the City of Suffolk with Project of the Year Awards.

The awards will be recognized at the APWA Mid-Atlantic Chapter Conference and Equipment Show in Norfolk, Virginia on Thursday, May 16, 2019. Additionally, these projects have been submitted for national award consideration.

The intersection of College Drive and Harbour View Boulevard in Northern Suffolk has seen tremendous growth in traffic volumes over the past 15 years as commercial development has continued to locate in this area of Hampton Roads that is ideally situated adjacent to I-664 and central to both Peninsula and Southside localities. The original configuration of the intersection was modified significantly in early 2000 in association with private development in the area. Major improvements to Harbour View Boulevard were completed at that time, however a skewed alignment of Park Drive’s intersection with College Drive remained. The modifications to Harbour View Boulevard created additional alignment issues at the intersection with the existing two-lane configuration of Armistead Road. A roundabout was ultimately chosen as the best design solution to address the intersection geometrics and safety concerns, however, based on the tremendous growth projected for the area’s future traffic volumes, the design would incorporate not a single lane or even two lanes, but ultimately allow for

the construction of a three-lane roundabout. While current traffic volumes did not warrant the three lanes, the design would allow for a third inside lane to be added as development pushed traffic volumes to a level necessitating the additional capacity.

The City of Suffolk recognizes the intersection in their 2035 Comprehensive Plan as a critical junction in the transportation network requiring improvements. The project was completed in the fall of 2018. Motorists have quickly adapted to the new intersection geometrics providing improved access to businesses and residents in the area and providing a new gateway to future development.

The City of Suffolk and the City of Chesapeake under a cooperative agreement completed the widening of the Nansemond Parkway/Portsmouth Boulevard corridor (Route 337) in the fall of 2018. The approximate 1.5-mile project provided not only much needed capacity and safety improvements for motorists along the corridor but also provided improved and safer access for bicyclists and pedestrians along the heavily traveled roadway.  Construction included three bio retention basins and three storm water management facilities, drainage system improvements including a dual box culvert extension, utility relocations, intersection improvements, a 10-foot sidewalk, and landscaping enhancements. The completed project allows for direct access to I-664 in Chesapeake from Suffolk.

The architecture and engineering firm Clark Nexsen provided design services on both projects and was responsible for putting the award submission applications together.

The APWA’s Mid-Atlantic Chapter Awards Program was established to recognize outstanding individuals and groups representing the best achievements in the Public Works profession in the chapter. 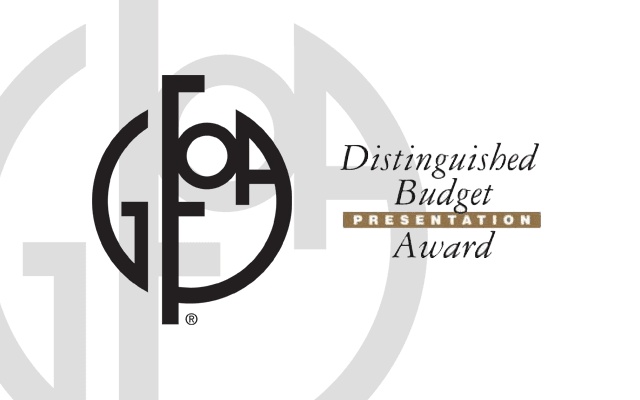 The City of Suffolk Finance Department - Budget & Strategic Planning Division has been awarded a Distinguished Budget Presentation Award by the Government Finance Officers Association of the United States and Canada (GFOA) for the tenth straight year for its’ 2018/2019 fiscal year annual budget. The award reflects the commitment of the governing body and staff to meeting the highest principles of governmental budgeting.

In order to receive the budget award, the City of Suffolk had to satisfy nationally recognized guidelines for effective budget presentation. These guidelines assess how well the budget serves as a policy document, a financial plan, an operations guide, and a communications device. Budget documents must be rated “proficient” in all four categories, and in the fourteen mandatory criteria within those categories, to receive the award.

The Government Finance Officers Association (GFOA) is a major professional association servicing the needs of more than 19,000 appointed and elected local, state and provincial-level government officials and other finance practitioners. The GFOA established the Distinguished Budget Presentation Awards Program (Budget Awards Program) in 1984 to encourage and assist state and local governments to prepare budget documents of the very highest quality that reflect both the guidelines established by the National Advisory Council on State and Local Budgeting and the GFOA’s best practices on budgeting and then to recognize individual governments that succeed in achieving that goal.

Documents submitted to the Budget Awards Program are reviewed by selected members of the GFOA professional staff and by outside reviewers with experience in public-sector budgeting.