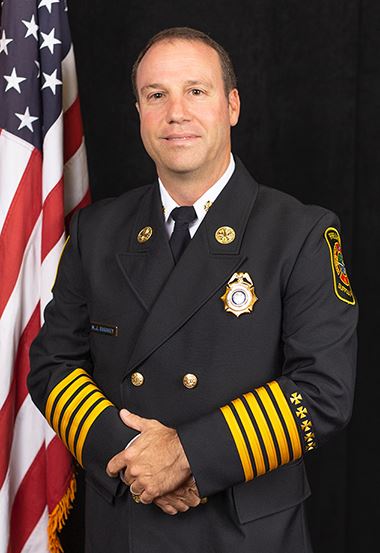 Barakey has been in the fire service since 1993. He previously served as a District Chief with the Virginia Beach Fire Department and provided leadership over Special Operations, Personnel and Development, Communications and Information Technology, Finance and Budget, Resource Management, Research and Analysis, Accreditation and Training.

He has operated at and commanded many major incidents locally and throughout the country and world. Barakey was a Task Force Leader for VA-TF2, one of 28 National Urban Search and Rescue Teams, with numerous deployments to include the Salt Lake City Olympics (2002), Hurricane Katrina (2005), Haiti Earthquake (2010) and most recently Hurricane Maria and Irma in Puerto Rico (2017).  He is a Hazmat Specialist, a Fire Instructor III, a Nationally Registered Paramedic and a Neonatal/Pediatric Critical Care Paramedic for the Children’s Hospital of the King’s Daughters in Norfolk, Virginia.

Barakey holds a Master of Public Administration degree from Old Dominion University in Norfolk, Virginia; is a graduate of the National Fire Academy’s Executive Fire Officer Program (2009); is a peer assessor for the Commission on Fire Accreditation International (CFAI) and is designated as Chief Fire Officer (CFO) by the Center for Public Safety Excellence. He regularly contributes to Fire Engineering Magazine, and will publish his first book in 2018 titled Critical Decision Making, Point-to-Point Leadership in Fire and Emergency Services (by PennWell Publishing).

Barakey is married and has two children.