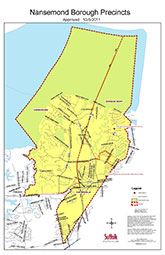 Vice Mayor Ward has been a resident of Suffolk for more than 30 years and is the founder and publisher of two community newspapers and a magazine, Suffolk Happenings, Hampton Roads Happenings and Having Church Magazine. He is also an author and host of his own 30-minute television and radio show.

He is a former president of the Nansemond Suffolk Branch of the NAACP. Vice Mayor Ward currently serves on the Western Tidewater Regional Jail Authority Board and the City School Advisory Committee on Collaborative Fiscal Concerns.